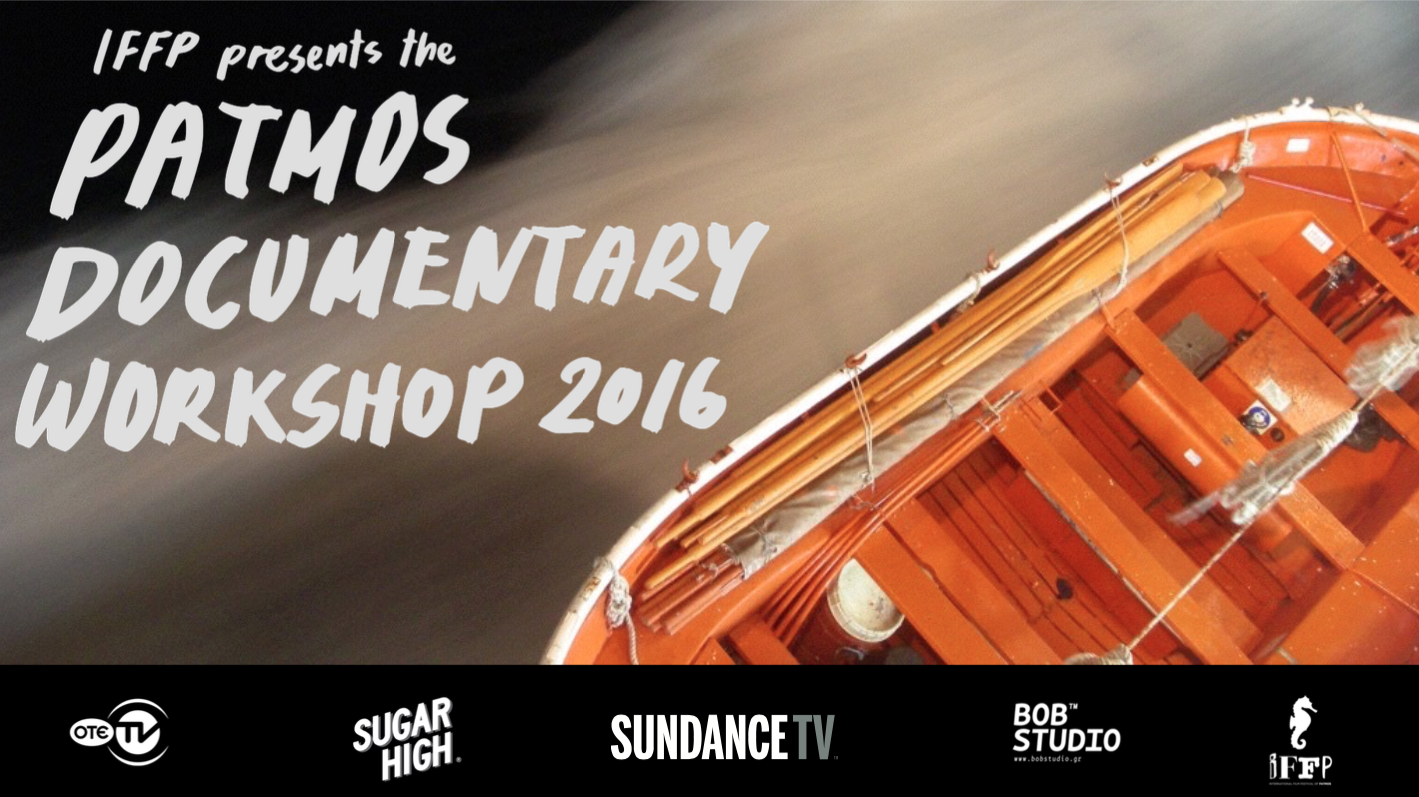 For the full presentation

The International Film Festival of Patmos IFFP and SugarHigh Films are, for the second time, organised the Patmos Documentary Workshop for emerging filmmakers.

Successful applicants spent 2 weeks on the Greek islands, working in teams of 3 to each create a 10 minute documentary portrait that will be screened on the closing night of the festival.

The project consists of three phases:


After the summer, the participants’ footage are being reworked by Sugar High Films into a single, feature-length documentary called Faces of Immigration. This modular, collaborative, feature length documentary will then be released at international festivals, will premier in Patmos 2017 and will be broadcast on international television channels, including Sundance Channel and OTE TV.

The workshop was founded in 2013, with the intention of bringing together young filmmakers in order to create a new, exciting kind of documentary production method. By partaking in the workshop, participants will leave with sharpened skills, international contacts, an industry credit for a widely distributed feature and a great experience.

The eastern Greek islands stake out the borders between Europe and Asia, east and west. Set apart, between worlds, they are places where people have come to retreat, occupy, spend their holidays or even escape from time altogether.

Now, the Dodecanese islands, places steeped until recently in tradition, religion and ancient history, find themselves on the front line of one of the defining humanitarian crises of recent times. On any given beach in these parts, you might find tourists enjoying their summer vacations, or you might find a crowded boat full of people fleeing from war, merciful to have safely reached dry land. 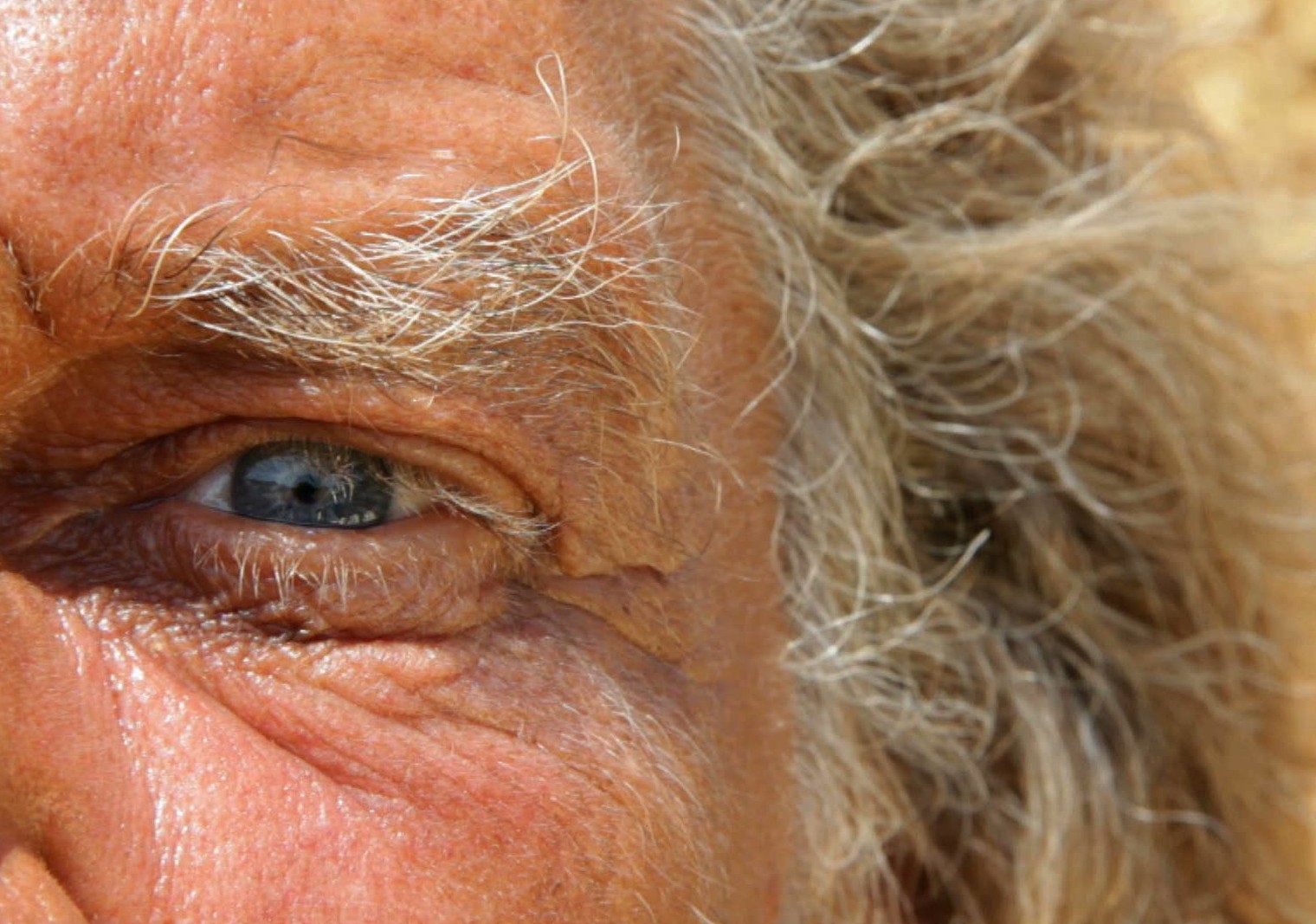 This summer, the theme for the workshop is THE FACES OF IMMIGRATION [working title].

Each short film or "portrait" will trace a single part of a connecting thread: a local priest, a volunteer doctor from Ireland, the local bar owner selling coffee on the beach, a member of the Frontex coast guard, a Syrian refugee who is escaping war, an international press reporter, the Iraqi immigrant working as an impromptu translator, a British tourist attending a wedding, the German architect renovating his holiday villa, the riot policeman controlling the crowds, the local undertaker; they are all swept up in the wave of immigration.

What do they see, what do they fear, where have they come from, what are they hoping for, where is home?

When the international media have flown home in search of new tragedies, we will try to dig deeper, look harder, and provide a lasting insight into what this phenomenon - the movement of peoples - really means today.

Assistance and professional mentoring on development research and storytelling

Fixers and translators as required

Boat tickets between the islands

50% discount at the festival’s restaurant in Patmos

Dedicated networking event for the participants and VIP guests

Your work screened at international festivals, TV and online platforms including Sundance Channel, OTE TV and many more 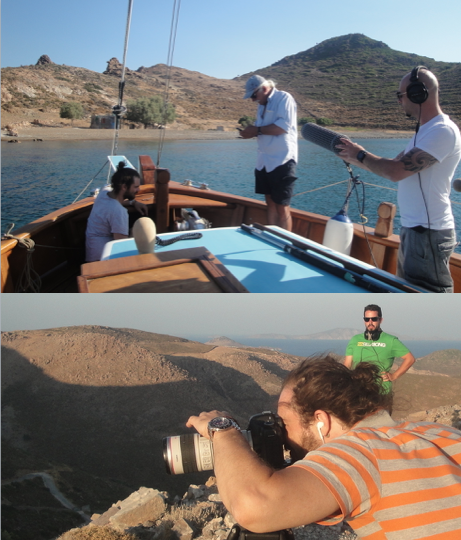 This amount is to be paid within 10 days of acceptance to the course.
Payment can be done either through debit or credit card, or through direct bank transfer.

We expect places to fill up quickly, so book early to avoid disappointment.

Places are going to be given as soon as qualifying applications are submitted, according to the discretion and selection of the Workshop Organisers.

Upon acceptance & payment, an invoice for the full amount will be issued for use with your tax authority.

There is a processing fee of €25 for every application. This fee is non-refundable, and is payable through PayPal upon submission of application.
Equipment
For Filming (per team):
1 x HD SONY A7s or CANON 5D DSLR
1 x set of lenses
1 x Tripod
1 x set of sound recording equipment with boom & wireless mic set
1 x set of reflectors

Also available upon request and to be shared between the teams:
GoPro and mounting gear
3 sets of Lights - Dedolights - LitePanels - Kinoflos
Drone 4K for Aerial Filming
Travel
There is no airport on Patmos, which is why it has remained so unspoilt.

There are 2 ways to reach the Island:

1) The best way is to fly to Kos Island International Airport (KGS) and then connect to Patmos via a short 2 hour ferry journey.

2) Alternately you can take the overnight ferry from Athens (Pireaus) directly to Patmos.

The festival will book and pay for ferry transfer from Kos and the surrounding islands or Athens Ferry Terminal, to Patmos.

Upon acceptance on to the course, we recommend that participants book their flights straight away.


For help in booking or for more information, please don't hesitate to contact us at [email protected] 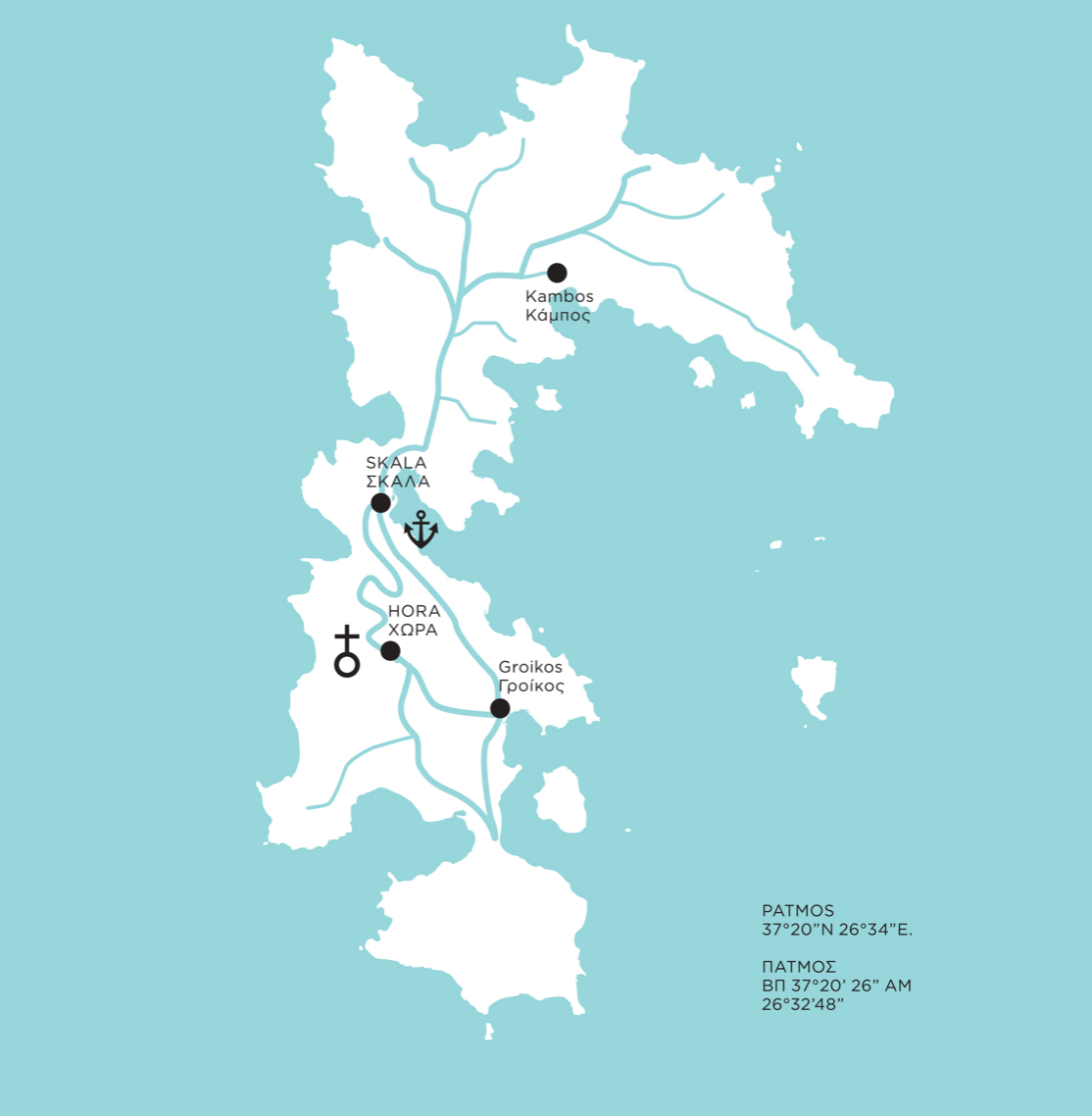 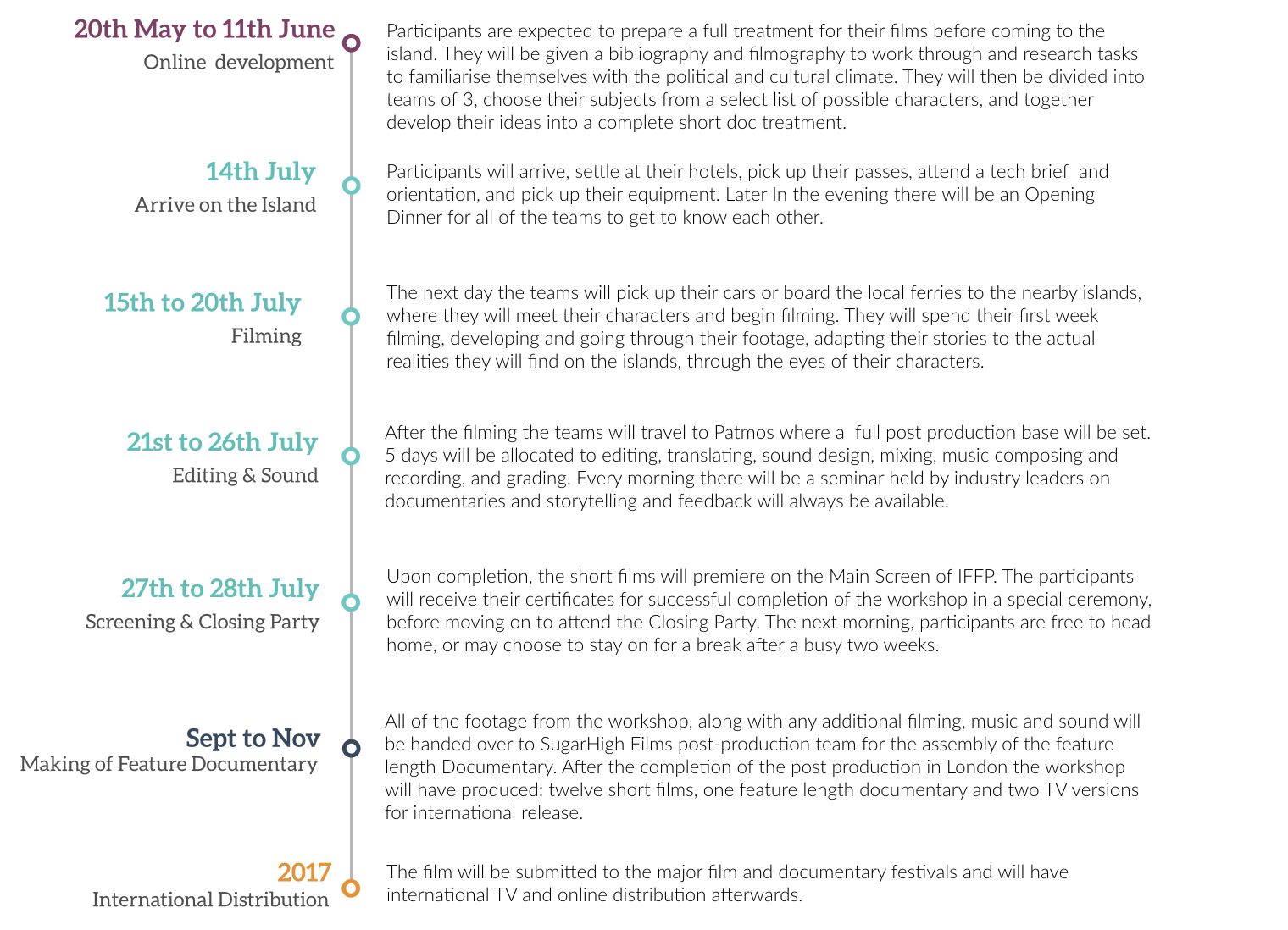 In the Summer of 2013, we brought together 18 talented emerging filmmakers with 15 experienced cinema professionals and created the Patmos Documentary Workshop.

"Life in the Borderlands: Portraits of Patmos" was the documentary produced by the original documentary workshop in 2013.

A teaser trailer for this original film can be seen here.

The characters of the documentary were drawn from three different social groups of the island - residents, monks & artists, and international personalities. The aim of the documentary workshop was to depict the unique personal freedom of the people who meet in this land of geographical, spiritual and social borders.
For more information please do not hesitate to get in touch, by contacting us at [email protected]